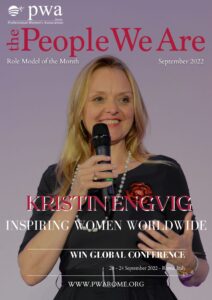 I have met Kristin at PWA events without knowing that behind her smile, warm and friendly attitude is a founder of a leadership organization WIN – Women’s International Networking, most known for the iconic Global WIN Conference that has gathered thousands and thousands of women over the years. Kristin is a true pioneer because WIN was founded in 1997 when the women’s empowerment movement was still weak.

I met Kristin on a hot summer evening in a cozy café in Trastevere to interview her. We talked about Kristin’s work and leisure activities and of course about her family. As we were about to finish up and leave, we discovered that we had some common interests.

Kristin is originally from Norway, studied and worked in Milan and has lived in Lausanne, Switzerland for many years. An international background always makes me curious about a person’s life experiences, but I was even more impressed by her enthusiasm when she spoke about the importance of networking among women and women’s business opportunities. She told me she had been interested in women’s issues since she was young.

Kristin’s decision to leave Norway and move to Milan was a combination of her desire to pursue a Master’s degree and her desire to learn Italian. Kristin studied Business Administration in Oslo’s BI Norwegian Business School and obtained an MBA in International Economics and Management at Bocconi University in Milan.

After her studies, she worked in a bank in Milan. Her life changed when she got the opportunity to participate as a teacher of marketing in the EU  Programme at universities in different countries. During her travels, Kristin experienced that gender equality is not common all over the world, but even less so in Eastern European and African countries. She was struck by how many smart and intelligent women she met did not have the same career opportunities as men, were much lower paid and were treated by men as simple housewives. Moreover, in Africa several Asian Countries she met women in not very good life conditions

I used to tell myself how privileged I was. I got an education, I got health care, but most of all I had a choice.

That’s when she started thinking about how to create a network that would bring equal employment opportunities not only to women but also to men and people of all ages.

At that time Kristin was a member of PWA in Milan. All of the members were much older than her and were professional women. She noticed that women, in order to build a career, had to copy the behavior and attitude of men, otherwise, they were left with no chance of success. The combination of her PWA and the international experience was so powerful that she started to organize the first networking events that were held under the PWA banner. Only after, she created WIN.

Over the years, 3-4 day conferences and training sessions have been held in many countries on three continents. In addition to Europe, also in Asia and African countries. Local volunteers and collaborators are essential to the success of the event.

In the beginning, she had to create content for the conferences together with a briefing and coaching the speakers which were crucial.

I had the vision of a more feminine authentic and global world and not all speakers understood well the concept of authenticity.

After thirteen years in Milan, where Kristen met her love, she decided to follow him to Switzerland where he got a job. They settled in Lausanne and WIN’s offices have been based there ever since and of course with a strong presence in Italy always.

She is a proud mum of her son Leonardo, that recently graduated from Kings University in London and started now to study art at Glasgow School of Art.

Kristin practices yoga for many years and acted in the theatre where she followed both the modern Stanislavski method and a more Zen-based approach of acting. She applies some of these practices during her conferences. Back in Norway, she enjoyed cross-country skiing which is a national sport. In Switzerland, she practices downhill skiing more.

When talking about women in business, Kristin sees a huge difference between then and now. Women have become more confident, building careers without the need to act like men.  Plus, the world is changing, and there’s a big problem with climate change. In order to save the planet from devastation, we need to change our attitudes and habits and it is important to bring the female side into business. We cannot continue with a male perspective alone.

Her leadership model is about listening to people around her and take decisions many times in collaboration with others.

I see a leader of the future who will exude calm and security for team members as well.

After years of living in Switzerland, she became a member of the PWA again, this time in Rome. PWA provides her with the international environment that is so important to her.  She enjoys informal friendly gatherings in amazing places.

I love the spirit of PWA that is about supporting each other.