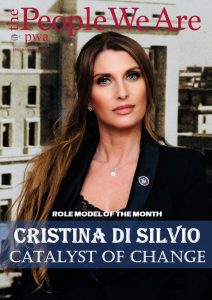 When I was about writing this article I didn’t know where to start. Cristina has many professional activities but what impressed me the most, was her dedication to social issues.

The list of her professional and volunteering activities together with received honors is really impressive.

Meet Cristina, a professional with a legal and financial consultancy background, and what is more important, a woman with a big heart.

After a decade of running her professional consultancy firm, working with many professionals from both, legal and financial sectors, in September 2019 she was offered the position as Regional Director for the Capital City of Rome – United States Foreign Trade Institute, that she couldn’t refuse. Her prestigious appointment preceded by a collaboration that was born on the occasion of the International Conference “European Funds for the Development Bridge Italy – United States of America” held at the Chamber of Deputies on November 15, 2018 and which she co-organized.Mission of Cristina and her colleagues, is to help private companies or (local) governments around the word to obtain money for projects that might be interesting. The aim, of the projects Cristina and her colleagues work on, is not only economical but many projects are connected to human rights.

“We helped to build a hospital and a school in Congo but we help also to start ups and companies and other local projects around the word.”

It is important to point out that Cristina has received several prestigious awards for her professional activity, among which the “Cartagine Award” which has been conferred to her for two consecutive years at the Campidoglio in Rome, and more recently, the “Capitolino d’Oro” Award given to her at the Circolo Ufficiali dell’ Aeronautica Militare in Rome.

Cristina started her professional career in the Tecnocasa Group in the mortgage sector as responsible for relations with credit institutions; later she held a similar managerial role in the mortgage sector of the Gabetti Group, operating at national level, coordinating and following the development of commercial areas. Having this experience, she decided to continue as a freelancer and created her own professional firm.

Over time, she achieved ever greater goals in the sector of trade associations becoming in 2019 Central Director of the Regional Delegations of the National Association ASSOIMPRESE and subsequently founding the ASSOIMPRESE ROMA Association of which she was appointed President.

Cristina has not developed only her professional activities but she also weaves important national and international relationships, also by virtue of her position as Vice Consul and Legal Adviser for the International Institute for Diplomatic Relations – Commission for Human Rights, a body registered with the Department of Economic and Social Affairs of the United Nations IGO Section “Intergovernmental Organizations”.

Despite her busy schedule Cristina never neglects her commitment to social issues. She volunteers at the Oncohematological Department of the Bambino Gesù Hospital of Rome, that is only one of her many volunteer activities and that she considers as the one most significant.

“For many people it is hard to see small babies dying or to have big health diseases, but if we don’t help them or we don’t try to give them something from us, nothing will change”

Cristina always traveled, either for work or for a passion. On one of her trips, in San Domingo, she saw a poor, dirty child without legs with his Mum. It was the moment that changed her life. She decided to help not only with money but really to do something.

“I am a normal person, the only thing that I believe is, each person can give something because in each person there is power, but sometimes we prefer to be blind.“

For her volunteer work, Cristina received several honors, such as Ambassador for the Peace last November 24th in Rome but the biggest honor for her is the possibility giving joy to others.

“I will remember forever the Easter of this year when together with ARGOS Forze di POLIZIA and A.S. ROMA we brought some Easter eggs and other gifts to children recovered in the San Camillo Forlanini hospital in Rome. Their joy and smiles are the best reward for me. “

Cristina is a proud Mum of two children. 18-year-old Emiliano and 15- year- old Lucia Serena. They both study at the high school in Malta, living on their own in the college. Cristina saw them growing up fast, becoming independent persons that have to take their own decision on a daily basis.

Besides traveling, in her free time, that she doesn’t have much, Cristina prefers doing simple things like walking her seven! dogs and meeting her friends. It shouldn’t be surprising that all her seven dogs were rescued and adopted.

She became a member of PWA to meet other professional and independent women. She compliments many of them who moved out from their countries of origin and created their lives, families and careers in Rome.

In her opinion, women are very strong, and when making decisions, they think globally and take into consideration many aspects. Working together, women can make many important things. In fact, Cristina says that those who support her most in the performance of her profession and who make up her team are women with whom she has a deep relationship of great esteem and absolute mutual trust. They are the ones who support her, and with them, she confronts herself daily in a way that is always sincere and unvarnished. Together they make their evaluations, which Cristina knows are sincere and which are absolutely important for her, from which she draws inspiration and fundamental indications to follow, and for these reasons she’s very happy and honored to work with Nicoletta della Penna.