Barbara Pepponi
“Beyond Statics Of Life” 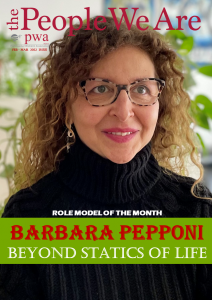 Meet this brilliant woman who, after her classical high school studies, curiously explored the world of mathematics and studied statistics at La Sapienza University. She started her professional career as an actuary in an international consulting company in Milan. After various international experiences, she followed her husband to Rome, where she joined the French insurance company Groupama, where, as Director of Non-Life Insurance, she currently leads a team of 140 employees.

Barbara is originally from Viterbo, where she graduated from Liceo Classico. As a lover of languages, she considered going in this direction when she had to decide on her university studies, but could not imagine working as an interpreter all her life.

She decided to study statistics because she found it interesting to study human behaviour based on mathematical facts.

After graduating, she moved to Milan. Her specialisation in insurance statistics allows her to work for a major consultancy, Willis Tower Watson, first in London and then in Milan. Although she found working in an international environment stimulating, she wanted to deepen her experience.

She started working for a British company in Milan. After a year, Willis Tower Watson called and asked her to come back and work on important projects. For Barbara it was an opportunity to get more involved in international projects and, along with her professional experience, she could also make more use of her language skills. After returning to the company she travelled extensively for work. She stayed in Madrid for one year and a half, and business trips to London, Paris, Madrid, Rio de Janeiro and Cologne became part of her life. Travelling for work was very valuable for Barbara because she enjoyed meeting people from different countries and cultures, and at that time airline tickets were not so affordable, especially not for someone at the beginning of her professional life.

In Milan, she met her husband Roberto. They worked for the same company. Roberto had the opportunity to move up in his career, he took a job with a major consulting company in Rome and Barbara followed him. They came to the Eternal City for a short period of experience and have lived there for more than 20 years. Barbara is a proud Mum of two children. Her daughter Silvia is studying medicine in Cagliari and her son Simone is a high school student.

After moving to Rome, Barbara joined Groupama. Her knowledge of languages was an advantage for her. Knowing French allowed her to make contacts with colleagues in the parent company and also to get to know the company better. She has held various roles at Groupama. She was promoted from Head of Actuarial Risk Management with a team of 20 people to Director of Non-Life Insurance with a team of 140 people. This was a big step in Barbara’s career and she greatly appreciated her boss’ support in leading her. She learned tips and tricks from a professional coach on how to manage such a large team.

“It was hard to manage such a large team, people of different ages and backgrounds. The main thing I learnt was to be more approachable to people and build a relationship with them. Now I know the name of every person on the team. The contribution of each one of us is key to meeting our collective goals “

Barbara doesn’t believe in the pyramid structure so typical of insurance companies. In her opinion, it is easier to have a stronger influence and achieve goals with a flatter structure in the company. People she can trust, communication and involvement are also important factors in successful leadership. She wants everyone on her team to be engaged and interested in working on projects and for everyone to be able to work independently.

She holds monthly meetings with her team, including online, to update them on the market, the company’s position and provides other important information to increase the motivation of the whole team.

As a STEM graduated woman working in a typically male-dominated industry, Barbara has had to deal with many different situations. At the beginning of her career, she was the only female consultant at meetings. She didn’t see this as a negative because she didn’t think too much about it. She was in a technical role, so it was easier for her to be seen as a serious partner to her colleagues and clients.  She encountered this situation from time to time when she answered the phones in the office. The people on the other end of the line often considered her to be the assistant to her male colleagues. At first, she was annoyed by this situation, but after a while, she got used to it and overcame these phone calls with ease.

She sees that there have been many changes since she started her professional career. More and more women are in leadership positions and are able to combine their family and profession.

“There are still many women who tend to create mental barriers or allow themselves to follow common models instead of searching their own way”.

It’s important to invest in yourself and break down those mental barriers. Women should realise themselves in work because their children, once they become teenagers, do not need them so much and spending time with children is actually a short period of life, although very important.

One of the reasons why Barbara joined PWA was the opportunity to network with other women from different sectors and countries. Barbara has been a member of PWA for two years. She greatly appreciates the atmosphere of the women’s community.

” I think it is quite difficult to meet women in Rome who are involved in business and PWA gives me this chance”.

Beside this, she is glad to have opportunity to attend different PWA events because she recognizes the quality of the speakers, who she finds very inspiring.

Barbara believes that diversity, in general, is very important for companies. Not just gender, but people of different age groups, different experiences, different cultural backgrounds. This diversity is also important for the small innovations that are at the heart of business and success. Challenges need to be posed, and it is easier to pose challenges when there is diversity.

“If you see an opportunity, you ask yourself if you can do it differently if you can improve it and so on.”

Barbara has many interests of all kinds. She likes to go to the theatre, to museums, and she is particularly fascinated by contemporary art. “There is always something that can strike your imagination or your feelings.” She always finds something in contemporary art that is not that normal. Confrontation with this “abnormality” allows her to balance mentally with her perfectly normal life and a perfectly normal job. She is keen on the sea, she likes windsurfing and sailing. She enjoys the connection with nature, with water and with silence very much. She usually spends her summer holidays with her family in Greece, where she can also practice her knowledge of ancient Greek transformed into modern Greek.

Barbara cares about the environment a lot. She has supported Greenpeace for many years because she is concerned about the impact of humans on the environment, especially in the area of climate change.

“I believe that our planet is in real danger.  I see this in my work as there has been a huge increase in climate events and climate disasters. We must protect the environment in order to preserve it for future generations.”

Her wish is to be more active in this area and hopes to be involved in environmental protection when she retires. If we see her in the future in her next role as an environmental activist, we shouldn’t be taken aback. This woman is a doer.