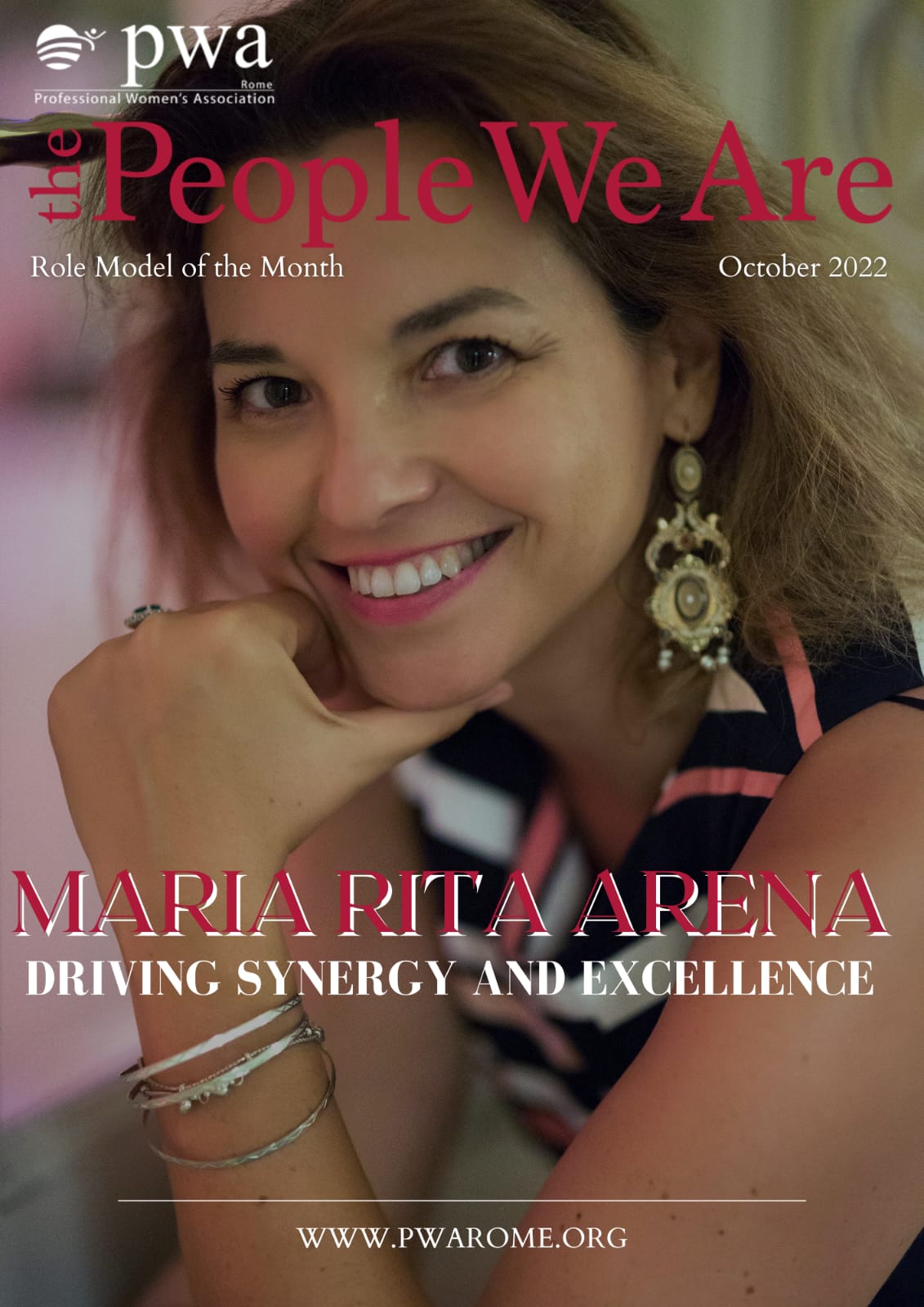 We are immersed in books and articles prescribing what we should do or how we should behave to become successful persons and successful leaders. Most of them take men as a model. We are determined to conduct our own research and, over this PWA season, identify the ingredients that make a successful female leader. We have our inspiring members to help us with that.

Maria Rita Arena is responsible for the advocacy, institutional relations and communications in ANIA, the association that represents the insurance companies operating in Italy. Its purpose is to develop and spread the culture of security and prevention and Maria Rita’s role is to align the various stakeholders towards the same objective: the protection of people and of the companies.

Born and raised in Rome, Maria Rita remembers her teenage years with a nostalgic air, disheartened by the contrast with the years prospected for her children. Beauty, brightness and freedom paved her entrance to adulthood in a period that breathed of peace and hope. After studying law at La Sapienza University, the layer Maria Rita was admitted to the Bar of Rome, specializing in litigation. Soon after, driven by the desire to render more service and reach a broader audience, she joined an insurance company and several years after she joined ANIA.

Attracted by a more multifaceted career, Maria Rita shifted from the legal office to focus on advocacy and institutional relations, working on the messages that ANIA develops to reach all its stakeholders. Economics and statistics are the new subjects that she begins to master while executing her role. English has become her second language, French her third.

The need to develop and evolve was her driving force, much more than ambition could have been. Maria Rita’s role is marked by her proactive trait of character, by her curiosity and interest in continuous learning. Her speeches are always supported by undisputable data she puts together to document, for example, the impact of a legislation over the economy and society in general.

Asked for her definition of a successful woman, here is what Maria Rita Answered:

A successful woman is a person who has managed to find her balance between the various aspects of life, between the professional side, the personal side, friendships, which are fundamental. All this while trying to stay inspired and dedicated to what she loves.

Having mentors, and especially a female mentor in her case, was decisive for her career. Barbara Pepponi, also a PWA member and her manager at the beginning of her career shift, has encouraged her professional training: two days after being hired, Maria Rita had the opportunity to attend one of SDA Bocconi Master courses in Insurance Accounting. Adding financial specialistic knowledge to her legal background enriched her professional profile while her self-esteem flourished. Maria Rita is certain that prosperity and women go together. And, I add, women helping women speeds up prosperity.

On her path many women inspired her, providing guidance when in need. Mother of two, her children represent her biggest success and she is determined to inspire in both her children a real respect shown to everyone, and to her son in particular, the respect for women.

Never stop developing new skills, leave a mark through what you do, master new subjects, respect others and oneself, stay curious. Inspire through the power of personal example. These are some of the ingredients that make Maria Rita Arena a successful professional.