May 2022 PWA Conference – Blockchain And Art

Are you curious to know whether blockchain is the future of art?

The event will be followed by a networking apericena at Hotel Donna Laura Palace.

Those who will not be able to join us in person will have the chance to follow the debate online.

Please find the details on the event along with the registration link below. 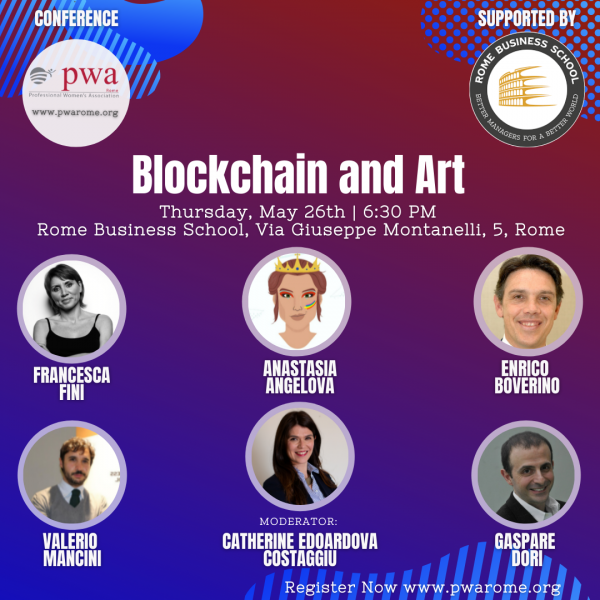 Her live projects are often addressing issues related to the relationship between public and private spaces, between the show and the audience, representation and interaction, but also reflect on the influences of society on gender and women’s issues and the distortions in the perception of beauty produced by the market and mainstream media. Both live and non-live works are a mix of traditional media, lo-fi technology, interaction design devices, generative audio, and video.

As a pure performance artist, she was part of the iconic first edition of the Venice International Performance Art Week, featuring among the others the work of Valie Export, Jan Fabre, Yoko Ono, Marina Abramovic and Hermann Nitsch. In 2014 and 2016 she was artist in residence at Bob Wilson’s Watermill Center in New York. In 2016 she wrote and directed Ophelia did not drown; an experimental feature film based on the hybridization between found-footage (from the national archive Istituto Luce Cinecittà) and original contemporary performative language, considered by legendary movie art critic Adriano Aprà, one of the best Italian experimental art film of all times.

She is cited by Treccani Encyclopedia as one of the greatest exponents of cyber-performance in Italy.

VP of Strategy and Growth at nft42

As a serial entrepreneur and investor in Web3 companies, Anastastasia has been involved in the blockchain space for over 5 years.

She is currently the VP of Strategy and Growth at nft42 and nameless.io  – an NFT tooling project.

Previously, she has been with Outlier Ventures, Nexo, and has co-founded several tech start-ups in the past. Anastasia is a supporter and ambassador of several #womenintech organisations and initiatives.

Gaspare Dori is a qualified French and Italian lawyer. He has over twenty-five years of experience in assisting companies in complex M&A projects and transactions. He has worked on more than 150 acquisitions, joint ventures and reorganization transactions. Since 2008, Gaspare is a partner in the international law firm CastaldiPartners.

Before joining CastaldiPartners, Gaspare Dori was Counsel at the law firm Clifford Chance, where he worked for more than twelve years, first in Rome and then in Paris. Gaspare Dori’s client base includes exclusively companies, both large / multinationals companies and small and medium enterprises (“SMEs”).

Gaspare Dori teaches Comparative Contract Law between France and Italy at the University of Paris X – Nanterre, in the framework of the double master’s degree with the University of Bologna. Moreover, he regularly lectures in training programmes for SMEs in the field of external growth. In the past, he has been adjunct Professor at the International Chamber of Commerce (ICC) in a project on international mergers and acquisitions for in-house lawyers.

For several years now, Gaspare has been dealing with the opportunities offered by new technologies (including, blockchain and smart contracts) and related legal aspects. In this field, he is the author of two recent articles on blockchain and M&A and a regular speaker at conferences and round tables on new technologies in France and Italy. His working languages are English, French and Italian.

Gaspare Dori has a passion for performing arts and playwriting. He is the author of several theater plays which have been premiered and performed in France, in Italy and in other countries. Thanks also to his Italo-French background, Gaspare is particularly active in spreading the Italian culture and art in France and the French culture and art in Italy.

Enrico Boverino is VP PreSales at VMware for EMEA. In this role, he has the responsibility to lead and develop a high-performance team of Solution Architects in Europe, creating a diverse, inclusive and innovative culture, continuing to evolve presales methodologies and architecture solutioning to maximise our customer successes. He helps companies across the globe to accelerate IT and business transformation and deepen the understanding of how the VMware solutions can deliver business results.

With continuous involvement at Executive level with customers, advising and supporting their efforts in Digital Transformation initiatives and Global IT Operation optimization, he developed knowledge and experience in several industry verticals, especially in Financial Services.

Enrico joined VMware in 2012 as Sr Business Solution Strategist for South EMEA, with the responsibility to define customers’ IT strategy to generate business value through pervasive enterprise adoption of Innovative programs.

Prior to VMware, Enrico was Executive Strategist & Presales Director at CA Technologies, managing an extended Presales team for Italy to support customer, outsourcers and service providers to adopt technologies for the business innovation.

Enrico is graduated in Electronic Engineering at Università di Pavia and has been ITIL-certified professional and previously ITAC-certified enterprise IT architect.

Enrico lives in Rome, he is passionate about food, football, and tennis that he’s practicing at agonistic level. 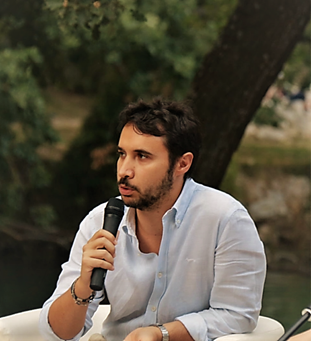 Professor and Director of the Research Center of the Rome Business School; he has been a visiting lecturer in Argentina, Colombia, Brazil, Cyprus, Syria, France, Poland and the United States. He is professor at the Armando Curcio Institute (Rome) and the Italian Design Institute (Milan) for the Master in Crypto Art and NFT.

He has worked in Italy and abroad with various international (UNODC, UNICRI, MAOC-N and OECD) and national organizations (MISAP, MASTERY and Youth Committee of the Italian National Commission of UNESCO). He has published several articles, reports and academic research, also about gender-gap in Italy and blockchain and anti-counterfeiting; he was a foreign journalist for the Colombian newspaper “El Espectador” and, since 2010, has been a correspondent for Italy for the radio program “UN Analísis”. Author of “Football & Geopolitics” (New World, 2021) and co-author of the Academical publication on Criminology (GDL – Grupo Distribuidor Latinoamericano SAS, 2018).

Catherine is the Programming Director and Vice-President of Professional Women’s Association of Rome. She joined the association in September 2019.

Catherine strongly believes in giving back, the power of network, the need of linking women’s minds across cultures and the urgent need to break the glass ceiling and is thus committed to promote gender equality and women’s empowerment.

Catherine is half Italian, half Bulgarian, has lived and studied in different countries (including Argentina, Canada, the USA, Bulgaria and Algeria), and speaks fluently Italian, Bulgarian, English, Spanish and French.

He has been teaching managerial disciplines at many Universities and Research Centres, such as the Roma Tre University, Luiss Guido Carli, and Salamanca University. Before starting his entrepreneurial career he gained considerable experience as a manager in large companies such as Enel and Trenitalia.

He is the author of numerous publications on subjects relating to organizational communication, marketing, and human resources management. Among them: Antonio Ragusa is the winner of international awards for his educational and entrepreneurial activities. Among the various recognitions, he has been appointed Academician by AEREC (European Academy for Economic and Cultural Relations) and has received the New York Award 2018 and the Emilio Castelar Award 2019 for his commitment to education on an international level.

(for the networking apericena; free participation to the conference)

(which includes participation to the conference and to the networking apericena)