Join the conversation with our panel of experts 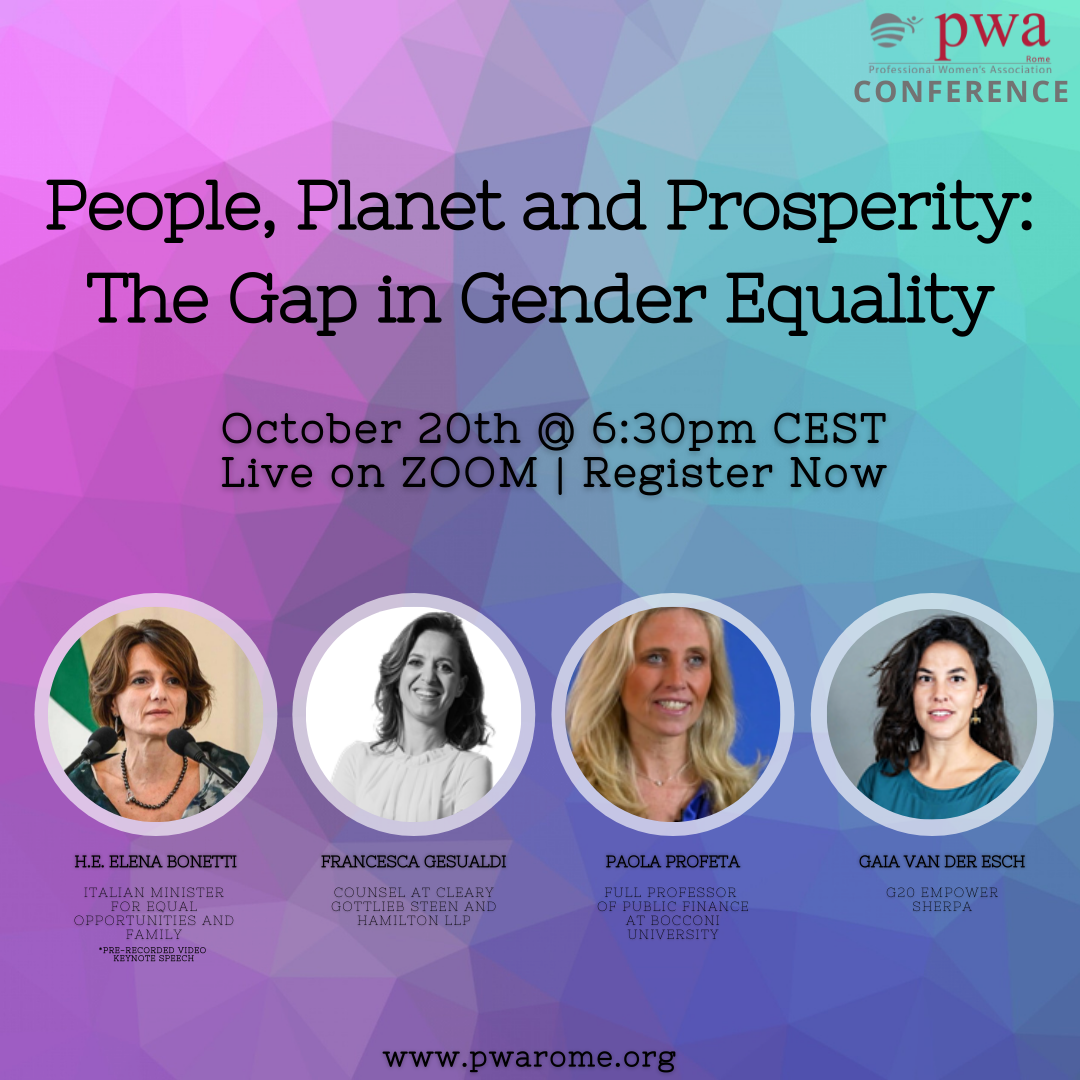 When it comes to gender equality and despite a set of laws introduced in Italy in the past decades, the country still lags behind many of its peers in Europe.

According to the EU Gender Equality Index, Italy’s ranking has improved eight-fold, reaching the 14th position out of 27 countries. Yet it is not enough. A lot more needs to be done to fill the gap. Especially when it comes to women’s employment and salaries.

Against this background, the Professional Women’s Association of Rome invites you to the October conference on the topic:

“People, Planet and Prosperity. The Gap in Gender Equality”.

Speakers will debate on:

The event will take place online on October 20, 2021 at 6:30 pm CEST, just a week ahead of the G20 Rome summit, where global leaders, among the main topics, will also touch base on gender equality-related issues under the title “People, Planet and Prosperity”.

Professor Elena Bonetti, Italy’s Minister for Family and Equal Opportunities, will hold a keynote speech through a pre-recorded video message.

The moderator of the conference is Catherine Edoardova Costaggiu, Vice-President and Programming Director of PWA. 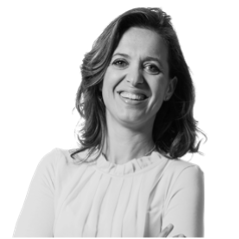 Francesca Gesualdi is Counsel at the international law firm Cleary Gottlieb Steen & Hamilton LLP, currently based in Milan after working in the Rome and New York offices of the same firm. She holds a master degree from Harvard Law School (2006), where she studied on a Fulbright Scholarship, and a law degree from the Università degli Studi di Milano (2002).

She is dual qualified to practice law in Italy and New York. She regularly represents domestic and foreign clients (including Sovereigns, corporations and banks) in a wide range of disputes, involving corporate, corporate, commercial, regulatory, banking and financial matters, across numerous industries, including fashion, infrastructure and energy. Her recent experience includes acting as counsel on records in the two most prominent litigation on the Italian market in the past two years, concerning the lease and operation of the Ilva Taranto plant and the long-standing legal battle between Vivendi and Mediaset, which was eventually settled in 2021. In both cases, Francesca was the only women counsel on records for the client in court.

She leads and organizes various women attorneys’ initiatives and events, with a focus on empowering women and promoting inclusion in the legal profession. She is included in the list “1000 curricula eccellenti” (“1000 excellent CVs”) by Fondazione Marisa Bellisario (an Italian association for the promotion of women professionals). 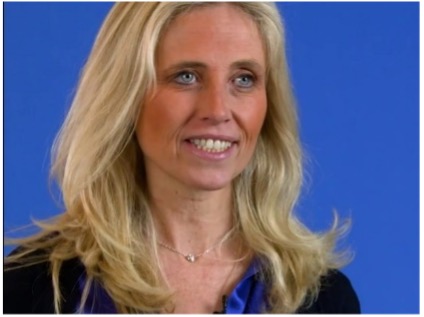 Paola Profeta is Full Professor of Public Economics at Bocconi University, director of the AXA Research Center on Gender Equality, research affiliate of CESifo and CHILD and scientific advisor of Unicredit Foundation. She is also the Director of the Master of Science of Politics and Public Policy at Bocconi. Paola is President of the European Public Choice Society and member of the board of management of the International Institute of Public Finance.

In 2020 she published the book “Gender Equality and Public Policy. Measuring progress in Europe” by Cambridge University Press translated into Italian by Egea.

She has coordinated research projects financed by international organizations, private foundations, universities and research centers. She organizes several international conferences on the topic of gender equality and female leadership. On the same topic, she is active in the national and international debate. She collaborates with the Department of Equal Opportunities of the Italian Presidency of the Council of Ministries and with numerous associations and institutions engaged in the promotion of gender equality and female leadership. She regularly writes editorials in Il Sole 24 Ore and collaborates with Corriere della Sera and blog La 27esima Ora 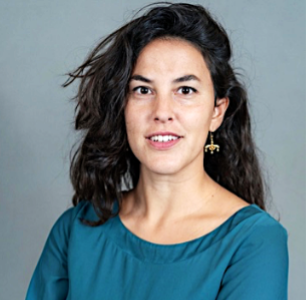 Gaia van der Esch is a European (Italian and Dutch) policy expert, opinion leader and activist, committed to bring change through her ideas and leadership.

Under the G20 Italian Presidency, Gaia is the Sherpa of G20 EMPOWER, the G20 private-public Alliance for the advancement of female leadership. She provides in parallel strategy support with concern to the G20 to the European Commission office in Italy. Prior to this appointment, Gaia spent 12 years living in Africa, the Middle East, Europe and the U.S. Working in international aid, she held executive roles with international NGOs and thanks to her efforts and leadership was nominated by Forbes as part of their Europe 30 under 30 list (2017).

As a policy expert Gaia collaborates regularly with major media outlets and her work was published in the Corriere della Sera, L’Espresso, the Harvard Kennedy School Review, and the Harvard Ash Center for Democracy. She has been featured in a number of magazines, including the Corriere della Sera, VanityFair, Marie Claire, IoDonna, F, Treccani, Linkiesta and others. She is regularly invited as a speaker to international events, including the Web Summit, the Forbes Under 30 Summit, the World Humanitarian Summit, the Habitat III Summit, the Harvard European Conference and the Harvard Women in Power Conference. Gaia recently published her first book, “Volti d’Italia”, delving into polarization and politics in Italy, released in 2021 by Il Saggiatore.

Gaia holds a Bachelor’s of Philosophy from La Sapienza (2006) and two master’s degrees, in international relations from Sciences Po Paris (2011) and in Public Administration from Harvard (2020).

Participation is open to all registered members and guests.

Registered participants will receive the necessary ZOOM link to connect right after registration.
Check-in commences at 18:15, starts at 18:30 sharp.