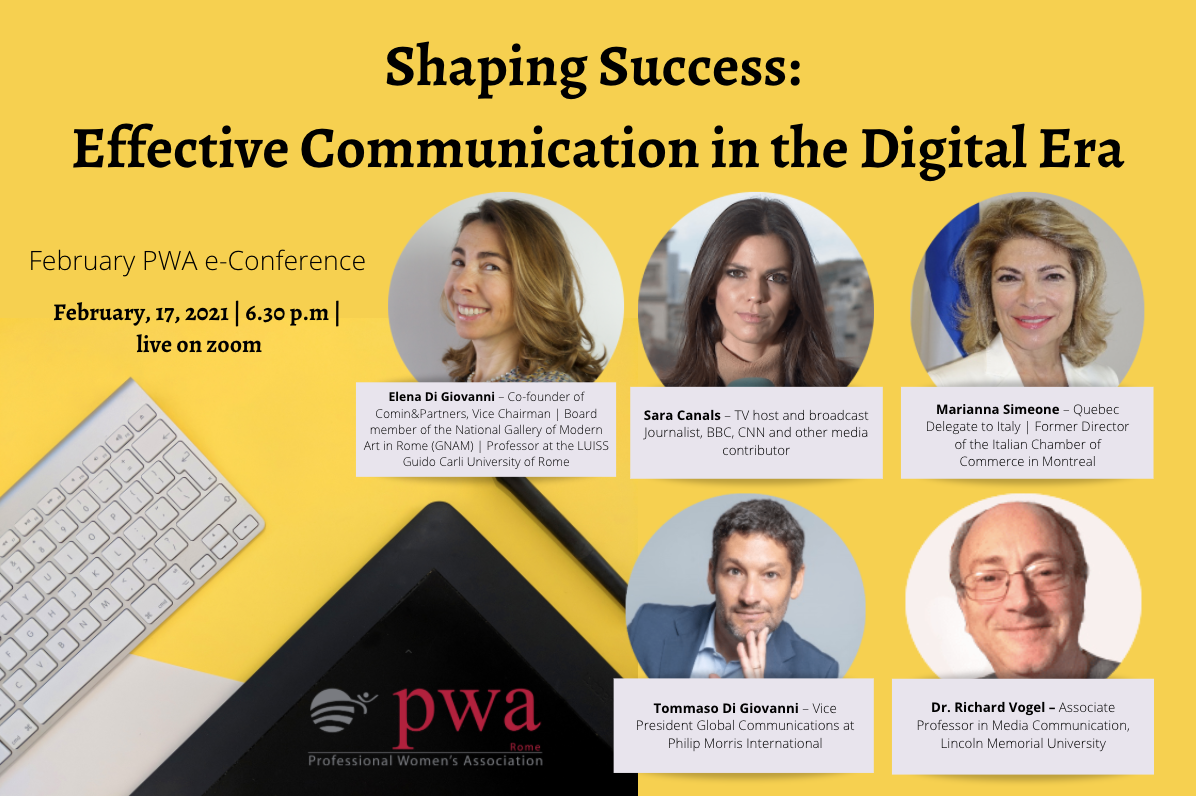 This e-Conference aims at giving important tips and tricks on how to become an effective communicator and reach the targeted audience! 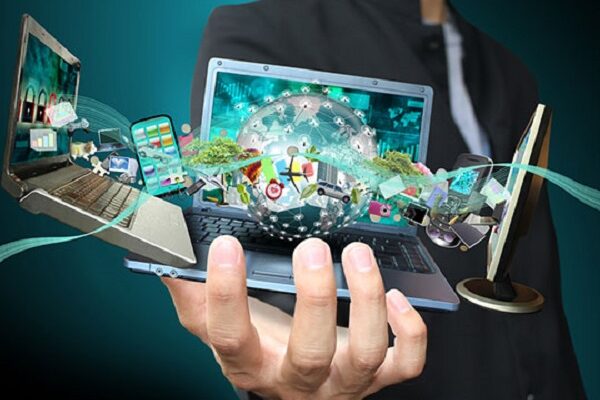 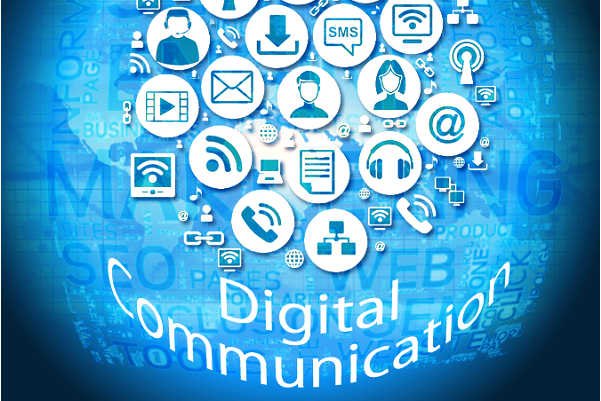 Effective communication determines also the enterprise’s success.  For an enterprise to operate successfully, all the company’s rules, core values, regulations and policies have to be communicated to the people within and outside the organization.  This allows to create value and to increase employees’ productivity and align the company’s values with the standards related to corporate social responsibility.

This is particularly true in the era of media and social media and for certain specific categories of professions. Therefore, PWA proposes a discussion panel to explore how to adapt effective communication skills to the current situation, in which we all communicate online, and how can the media be used to effectively communicate with others.

Join this e-Conference that will give you the right tools and techniques for effective business communication! 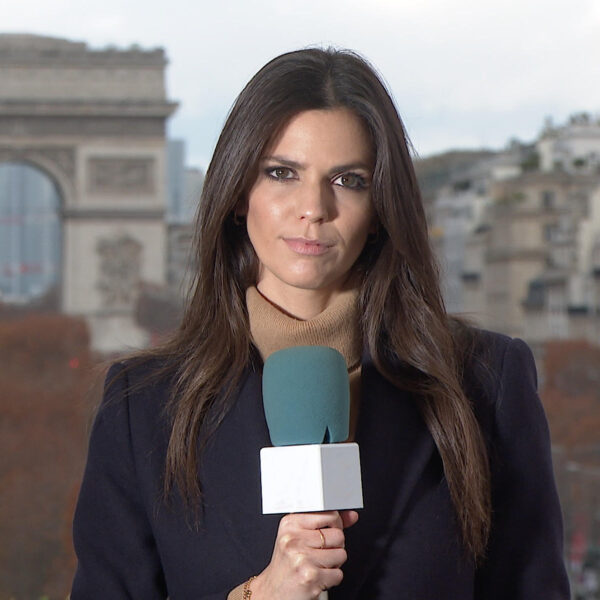 Sara Canals is a TV host and broadcast journalist specialised in international relations.  Currently based in Paris, she has more than 8 years of experience at leading media companies in Europe and the United States.

Since the 2017 Barcelona terror attacks, Sara Canals is a frequent contributor to the BBC, CNN and other international media on topics regarding Spain and Catalonia.  Key coverage includes the Coronavirus pandemic, the 2019 Spanish General Election and the ongoing Catalan Independence Crisis. As a TV presenter, Canals has hosted ‘LaLiga News’ (Mediapro) a daily live show covering the Spanish Football League for a global audience in Africa, Europe and America.  Previously, she presented FC Barcelona’s show ‘Inside Barça’ broadcasted in the United States.

Sara Canals is a Fulbright Scholar and holds a MS in Global Affairs from the New York University (NYU).  While living in New York, she worked at the United Nations, NY1 News, and directed and produced documentaries on the ground in Cuba, Costa Rica and Panama.  Canals also reported for 8TV, TV3, La Vanguardia, Onda Cero, and Ràdio i Televisió d’Andorra.

Canals received a Bachelor’s degree in Journalism from Blanquerna’s School of Communications and International Relations.  The School awarded her with the ‘Alumni Ambassador Award’ in 2020. 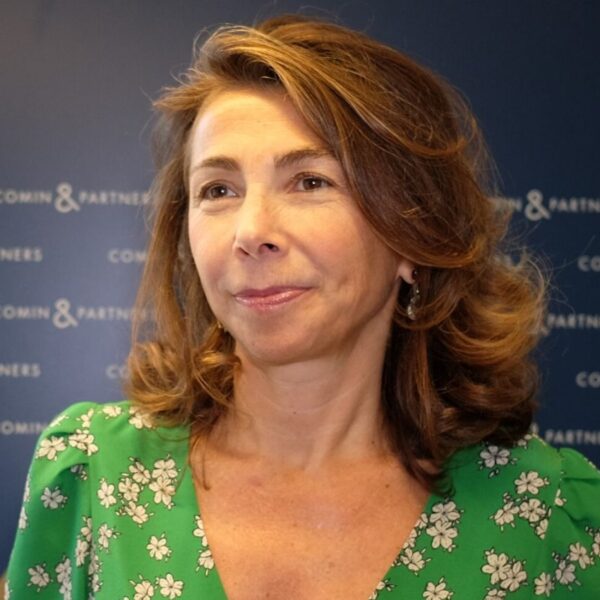 Elena Di Giovanni – Co-founder of Comin & Partners, Vice Chairman | Board member of the National Gallery of Modern Art in Rome (GNAM) | Professor at the LUISS Guido Carli University of Rome

Elena Di Giovanni is the co-founder of Comin & Partners.  She is specialized in corporate communication, CSR and the promotion of cultural heritage, she worked for Expo 2015 curating its communication internationally, following her permanence in Brazil and Germany, where she followed projects related to the promotion of Italy abroad and the development of public diplomacy.

She has been External Relation Director of Almaviva (an Italian IT company) from 2012 to 2013. During this period she worked on starting up the company in Brazil, targeting digital and crisis communication. Previously, she was Communication Director of the Venice Biennale for four years, under the lead of Franco Bernabè and Davide Croff. She started her career in Milan at Weber Shandwick and then joined Mondadori as Head of the Press Office.

Board Member of the National Gallery of Rome (GNAM) she coordinates the course “CSR & Stakeholder Management” at LUISS Business School. She is Co-chair of the Friends of the American Academy and member of the Executive Council of Diplomatia and Venetian Heritage. 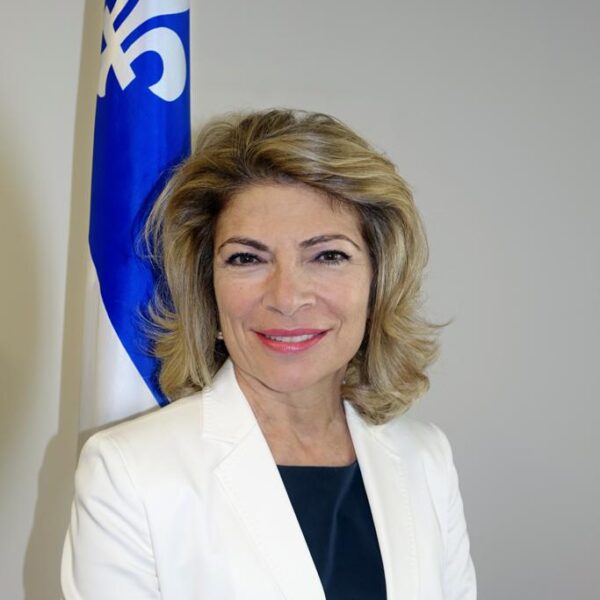 From 1986 to 2000, Marianna directed the Italian Chamber of Commerce in Montreal.  Under her leadership, the local organization grew to be one of the most performing in the ICC’s world network.  From 2000 until her nomination Marianna made her mark in media on the major Canadian networks.  Host, commentator and reporter, she worked both in radio and television, in English, French and Italian.

In recognition of her exceptional work in journalism, her service to the community and her contribution to Canada-Italy relations, Marianna was inducted “Knight” of the Order of Italy, invested “Golden Gladiator” of the Province of Benevento, received the Queen Elizabeth II Golden Jubilee Medal and named YWCA Woman of Distinction. 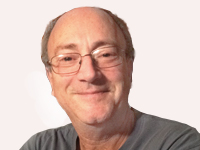 Dr. Richard Vogel, Associate Professor in Media Communication, is in his eighth year at Lincoln Memorial University in Harrogate, Tennessee, USA.  Prior to his time at LMU, he was a consulting producer to an award-winning news program and a writer, producer and director of a number of corporate videos as well as public service announcements.  He teaches a range of media writing, production and theory courses and has advised a skit comedy show.

He has also taught media law and English composition courses. In recent years, Richard was invited to present talks in China, Thailand and Myanmar.

In 2018, he received a Fulbright in Bangkok to pursue his primary research interests which involve creating media literacy curricula for ages K-12 and for universities. He has presented his findings to the Ministry of Education of Malaysia among other audiences. 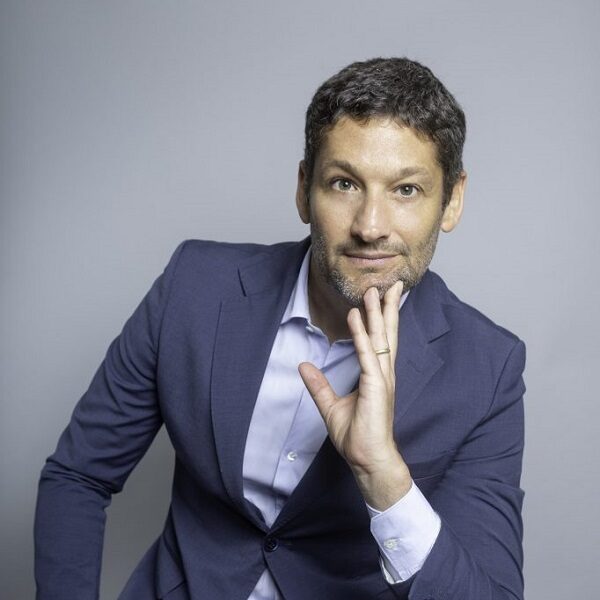 Tommaso Di Giovanni is Vice President Global Communications at Philip Morris International, where he leads the development of corporate communication campaigns around the world.

His priority is to spread knowledge and awareness about the opportunities presented by innovation, science and technology in relation to achieve a smoke-free future.  Additionally, in his current role, he is responsible for supporting Philip Morris affiliates around the world to share the company’s vision of a smoke-free future with the media and other stakeholders.

He began his career at Philip Morris in 2001 in France in the business planning and development department and has since held positions in the institutional affairs and communications departments in Lausanne (PMI Global Operations Center), New York (regional office of Latin America) and in Philip Morris affiliates in Brazil and Italy.  In 2012, he returned to Lausanne to pioneer corporate communication on smokeless alternatives substantiated by scientific research.

Prior to joining Philip Morris, he worked for the European Parliament and as a contracted economist at the European Statistical Office focusing on research and development statistics.

Participation is open to all registered members and guests.

All participants are requested to RSVP by 16th of February on our website form and will receive all the details necessary to connect to the e-conference right after registration.

The webinar starts at 18.30 and will last for one hour.

Be sure to register and bring your questions to actively participate in this event.