Our Speaker will dazzle you by the beauty of 20th century jewels and at the same time introduce you to the extraordinary variety of styles which has characterized the jewelry production of this century. The most representative types of jewels for each decade will be highlighted and placed in the context of fashion of the time. Amanda will extensively illustrate jewels created by the most renowned firms including examples by Boucheron, Bulgari, Chaumet, Cartier, J.A.R., Tiffany, Van Cleef & Arpels, and Harry Winston. 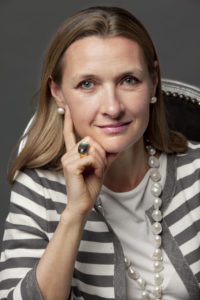 Amanda Triossi F.G.A. (Fellow Gemmological Association of GB) is a jewelry historian, author, curator,  lecturer on the history of Western jewelry design and an independent consultant to luxury goods companies.
Born and educated in Rome, Italy, she obtained a History of Art degree at Cambridge University. Her professional associations include executive positions at Sotheby’s and Bulgari. In 1992 at Sotheby’s Institute in London, she initiated and held the ‘Understanding Jewelry with Amanda Triossi’ course, the first intensive course on the history of Western jewelry.  From 1997-2015 she was a consultant for Bulgari which included heading the project for the creation of the company’s Corporate Historical Archives. Additionally, she worked closely with the Bulgari family curating the Bulgari Heritage Collection. From 2009 until 2013 she curated five major exhibitions on Bulgari in Rome, Paris, Beijing, Shanghai and San Francisco.
She has published extensively on the history of jewelry and on Bulgari.
Today she writes, vets Bulgari jewels, gives lectures and seminars, curates jewelry-centric trips internationally as well as consulting for major jewelry houses and private collectors.

Registration commences 18.30hrs. Conference 19.30hrs to be followed by our trendy networking cocktail.

Guest price €20
To register for the conference, please fill out the form below

RSVP by filling the form below.