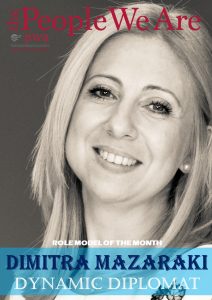 Despite her busy schedule, Dimitra made herself available for the interview, as soon as I proposed it. She strikes you for her positive attitude and frankness. Being in Rome for less than six months in a diplomatic mission, Dimitra is in charge of Public Diplomacy at the Greek Embassy in the eternal city.

After graduating from high school, Dimitra studied Political Science in Athens. Then, she had to support her family financially and so, instead of continuing her studies, she started to work in a big company and then she stepped into the family business.

“I decided for the political studies because I was always into books about politics and I had this utopic idea that I could change the world.”

In an impressive favour of fortune, her father pushed her to take an exam at the National School of Public Administration of Greece, which prepares graduates for senior government positions

In fact, Dimitra graduated from the Department of Public Diplomacy, and joined the staff of the Ministry of Press first, followed by a position at the Ministry of Foreign Affairs. It is quite an unusual environment because diplomacy is a female-dominated job in Greece, where the ratio of women to men is 80-20. It definitely stands as a world exception

Beside other characteristics, Public Diplomacy aims to exert influence on foreign audiences, something that Dimitra uses to describe herself as a “government influencer.”

And it is really something that matches her very well. Dimitra has a huge stock of extroversion and love for people, along with an unbridled curiosity to learn new things. Her focus is unprecedented, which is why her work is always effective. Her natural vividness, the positive energy she is able to communicate coupled with her great language skills (in addition to her mother tongue, she speaks English, French, Spanish, Serbian, Hebrew, Italian) help her approach people directly and genuinely

“Whenever I am posted, I engage with people to promote my country, the culture and to influence public opinion about my country.”

While already a renowned professional, she managed to obtain two Masters degrees, one in Journalism and Communications and another in International Relations and Strategic Studies.

Through her job, Dimitra fulfilled her life dream. A career abroad, acquainted with other cultures, collaboration with people from other countries, with different mentalities, with different cultural backgrounds, habits and attitudes. This job gave her the opportunity to live in countries so different from Greece, where she was born and raised. Her first post abroad was in Russia, where she stayed for almost seven years. She worked at the Embassy of Greece in Denmark, a country she loved very much and where she made many friends, with whom she is still in contact. She then worked at the Greek Embassy in Israel, where she experienced the war two years ago. She still has on her mobile phone the video of the interception of missiles in the sky of Tel Aviv, as well as a photo of a rocket fragment, which fell in her yard. Despite the difficult environment in Israel, she brings with her very nice memories because she was able to get familiar and integrated into the Israeli society, so much so that even today she has almost daily communication with her countless friends there.

Rome is another life dream which came true for Dimitra, The Eternal City has always been a Shangri-La for her, where her soul would find a sanctuary. And she did it! Now she enjoys the city she loves so much, she lives among people who are also extroverted, like her and she indulges in the culture that still gives light to Europe and beyond. Although she has only been in Italy for six months, she has managed to create an impressive professional and social circle, which she is constantly expanding.

Dimitra has been married for eleven years. Her husband Zafiris is in a diplomatic mission at the UN at Genève, Switzerland.

“It is very difficult for women diplomats to keep their relationships when their husbands cannot join them on their missions. But we all go through it. It’s important to be in everyday contact and see each other two weekends a month at least.”

Although Dimitra does not have biological children, maintains a very beautiful relationship with her husband’s son (from his first marriage). The young Diogenis, 18 years old, has a huge soft spot for her, as well as Dimitra does for him and they seek to be together as much as possible, although the young man lives in Greece with his mother. Diogenes, who wants to study International Relations, like Dimitra, loves to ally with her to tease his father, usually because he cannot compete with them in extroversion and energy. They are also bonded by something else: their love for the environment and its protection. They both love the sea and spend many days in the summer in Monemvasia in the Peloponnese (Where Dimitra originates from), enjoying the unique beauty of the landscape and studying ways to help protect it.

Dimitra is keen on theatre and opera, she enjoys meeting her friends and host and cook for them. And she is a dog lover. She doesn’t have a preferred breed, she just love them all.

Dimitra joined PWA because it gives her opportunity to make new friends, to meet women of different nationalities, share her foreign experience with other professional women who have similar interests, have their own careers and at the same time they care about what’s happening in the society.

“It is important for women to support each other and share their ideas. It makes us stronger.”

When it comes to women and their careers, in the opinion of Dimitra it is important that women seize occasions and become independent.

“We are lucky that women in our society can work on their careers and can show they are as professional as men. Not everywhere in the world women have this chance.”