Athlete DNA… runs in the family 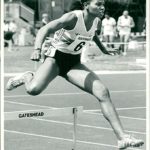 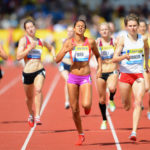 Half a century ago, my classmate Gladys Taylor, now Bird with whom I used to practice P.E. (Physical Education – compulsory in British high schools, and a few Italian primary), declared  she would one day participate in the Olympic Games. Many thought “good luck with that”, but I certainly believed her. We were both competitive by nature. Gladys was taller, and as we both had long legs, we were roped into the school basketball and hockey teams, besides an athletics must. Whilst I would beat her in the 100yds, she would shine in the 200yds, 400yds and relay. What made us differ was my aversion and her passion for sport. Plus, her stamina was as amazing as her smile!

ON CAMP WITH KELLY

Gladys has always been a part of an Athletics Club, as an athlete, coach and British Athletics League Team Manager. She has also recently assisted double Olympic champion Dame Kelly Holmes, who set up OCWK because she wanted to help the future of female middle distance athletes.

Gladys shares and supports Kelly’s vision of OCWK in that it should be an educational development programme so that those attending can gain life experiences as well as the knowledge of what it takes to become a world class athlete.

ABOUT HER DAUGHTER, TARA BIRD

Alan Bird, Gladys’ husband unsurprisingly is a very active executive part of BAL in Woodford Green with Essex Ladies AC. Together they have a very talented daughter, Tara Bird who started her athletic career as a 300m Sprinter, evolving thru 400m, 800m to 1500m.  Tara is on the fast track to success and will go far… well done mum!