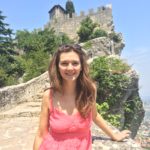 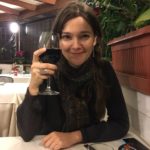 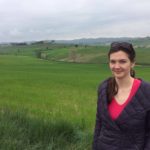 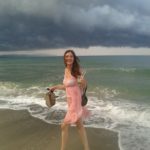 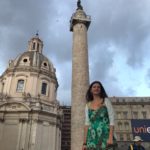 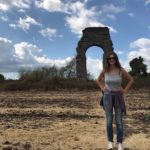 A proud “Daughter of Dracula”, Mirela carries the legend of the Romanian prince Vlad III The Impaler with her, as she pursues the fulfilment of her childhood dreams, one at a time. Living and working abroad. Having a dog of her own. Challenging herself in new job opportunities. Visiting museums and new sights with a guide. One dream – equality regardless of gender – is still to come true and the only thing that bothers her about her current home country, Italy. “The only positive thing about communism is that everyone is equal”, Mirela declares. But her dream city, Rome, continues to dazzle her with its splendours. “Nothing will ever stop me from loving Rome.”

Mirela Cojocaru grew up in Iași, Romania as an only child, but very close to her best friend, Ana, who is like a sister to her. Mom and dad always encouraged Mirela to reach for the highest stars, reminding her however, that to get there she had to work hard and give her best. Ever since she was 13, Mirela worked every summer and holiday period, delivering flyers and writing for newspapers, tutoring children in math and languages, and doing whatever she could to get new experiences and earn pocket money.

After high school, her choice of studies fell between chemical engineering – she had spent countless hours nurturing her passion for chemistry in school laboratories – and business studies. The latter seemed to open more doors and Mirela enrolled at the business department of the Alexandru Ioan Cuza University. She had always dreamed of living abroad and fulfilled her desire while being part of an exchange program in Chicago for four months, improving her English and cherishing the cosmopolitan, yet American atmosphere of the city. “I was even lucky enough to meet Angelina Jolie one day at an ice-cream shop”, Mirela remembers. “Chicago is a city full of surprises and I really adored every moment I had there.”

After graduation, Mirela started working for a small tourism start-up in her home town. It was the perfect opportunity to put into practice all the theory she had learned during her university years. Mirela challenged herself in several fields, from finance to accounting, from marketing and sales to building a vast catalogue of packaged trips. “It was a great start and gave me the possibility to work in a small company where everyone is responsible for everything”, Mirela recounts. However, her goals were much higher and soon Mirela started applying for Master’s programs abroad. After numerous months of sending dozens of applications per day, she was finally contacted for an interview: the Corporate Master program of Finnmeccanica was interested in her profile. Several selection sessions followed and Mirela felt that this was the perfect opportunity right from the start. To make it even more ideal, the program was in Rome, her favorite place in the world, ever since she had visited the Eternal City for one day with her best friend. “We travelled to Rome literally for 20 hours and toured every bit, from the Vatican to the Circo Massimo, from the Pantheon to the Coliseum. I completely fell in love with Rome and knew I wanted to come and live here. To make sure it would happen, I threw a coin in the Trevi Fountain”, Mirela laughingly jokes.

Mirela completed the MBA program with Finnmeccanica as one of the youngest participants and was hired by the company. Although she could not stay in Rome, but was positioned in Florence, Mirela decided to make the best of it. She worked in marketing and sales for European and US defence electronics for 7 years, feeling as if she was on holiday. “Watching the picturesque Duomo while coming back from my office, walking down the enchanting side-streets of the beautiful Renaissance town and tasting awesome red wines and delicious Tuscan foods in the evenings really made it seem like a long vacation”, Mirela confesses. But her dream-city was waiting for her and she finally obtained a transfer with Finmeccanica to Rome.

“The harder the challenge, the more attractive it is for me”, Mirela tells, when describing her character traits. Her long experience in the secure, gigantic world of Finnmeccanica prompted her to search for new opportunities. And when you search, you always find something. A small software house – restructuring its operations – was hiring, and Mirela didn’t hesitate to apply. She was employed and spent the month of May 2019 training in Milan. She is now fully immersed in contributing to reshaping the company’s export strategy, while also travelling, one if the activities she loves the most. “Getting to know new people and places really stimulates me and I get to use my five languages as well”, Mirela says. “I adore my current job and know it will give me a chance to grow and learn as well.”

To feed her curiosity for new things, Mirela also tries to take at least one guided tour every month, preferably “off the beaten track”. She enjoys hiking and on the weekends, she often goes for walks with her Venetian boyfriend and their puppy, Jeep. She considers herself a bit clumsy, but tennis – a sport she started as an adult – gracefully hides her clumsiness and gives her the right amount of exercise and fun. And after a tennis lesson, there is always a moment for a glass of good, red wine and tasty food.

Mirela has toured most of the European capitals and almost every Italian region. But she constantly finds something new to discover. Living in Rome has not disappointed her once yet and she continues to adore her favorite city as in her childhood dreams. “The only negative thing about Italy is the gender division that is still strong. Before coming to this country, I was never so aware of being a woman in any workplace I had been to”, Mirela admits.

Mirela has friends all over the world and has always liked being part of international groups. When she returned to Rome last year, she googled different associations and PWA’s high-quality website caught her eye. She came to listen to Elena Palloni’s conference in spring 2018 and really appreciated the welcoming, warm circle of professional women. After being a regular member for a year she was elected for the Newsletter Editor position a month ago and is looking forward to working with the rest of the Board and Team. “It will be another challenge to divide my time between the new job, PWA and all the other engagements I have”, Mirela admits. But then, wasn’t she the one always looking for challenges?