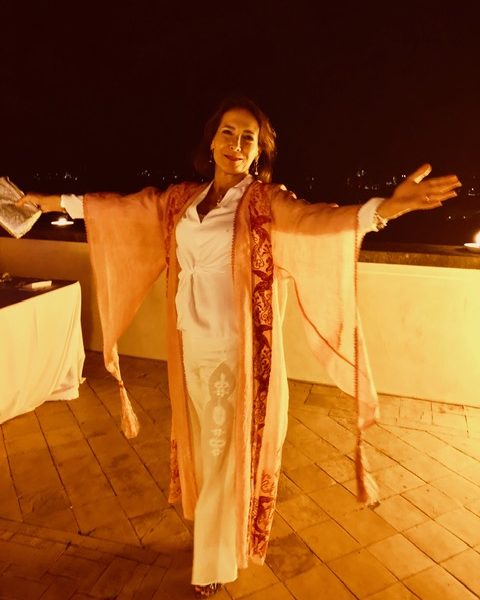 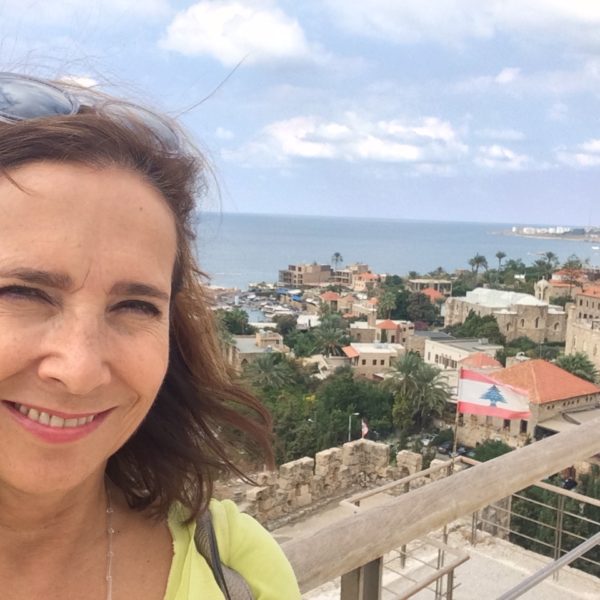 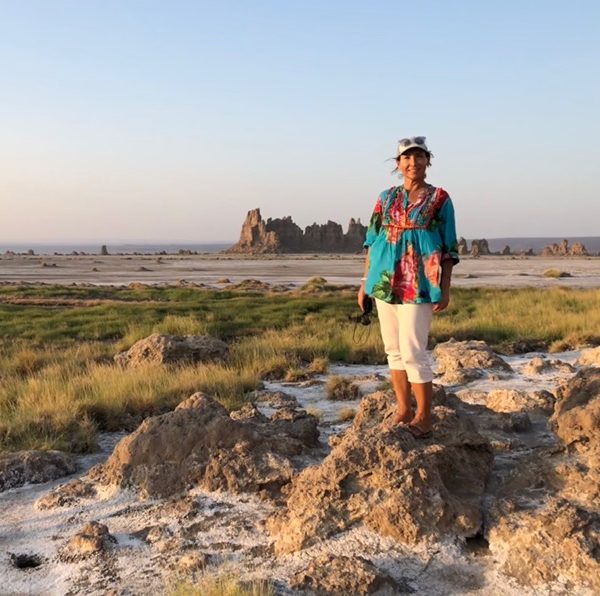 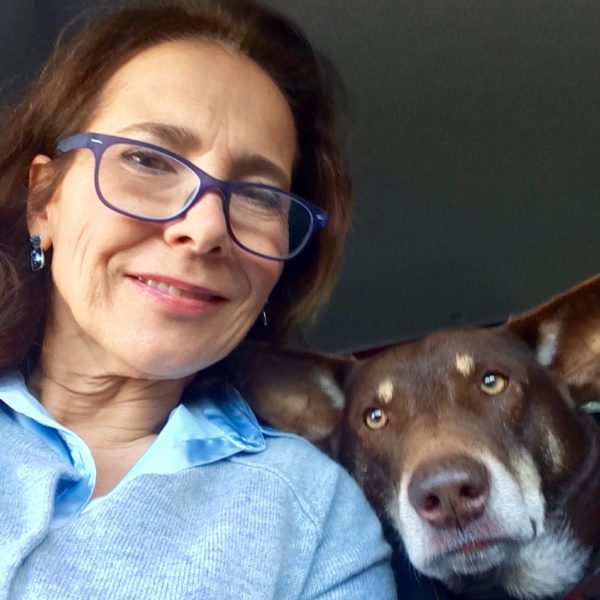 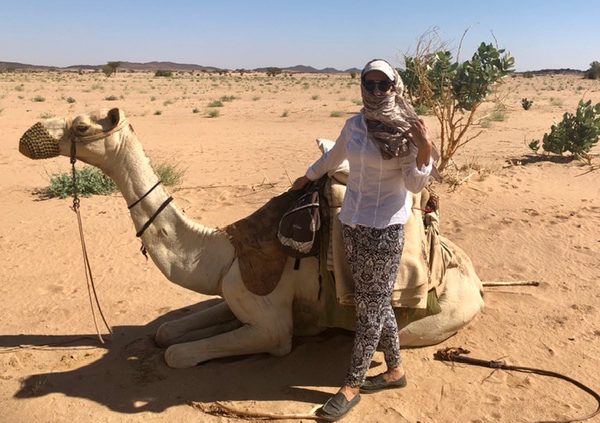 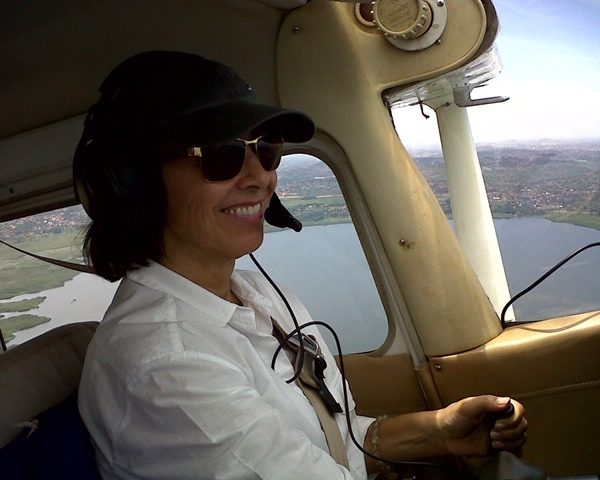 On King’s Day, April 27th, Gabrielle will, no matter where in the world, wear something orange. She loves the madness of this Dutch celebration, when everyone forgets about being serious and just has fun. She is also deeply Dutch in being extremely direct, both in her manners and her communication. But the rest of her is a bubbling mix of cultures, traditions and traits that she has picked up during her travels and brought with her from the homes she has built in the Middle East, in Africa and Europe. “Every country I’ve lived in has a very special place in my heart”, she admits, while unravelling her fascinating story in our skype call, in between two UN meetings.

Gabrielle Kluck grew up in The Netherlands in a family of four. Contrary to her sister – blond, tall and blue-eyed – Gabrielle was petite, olive-skinned with brown eyes, and armed with a passion for travel and continuous change. Ever since young, she was keen on improving the lives and living conditions of those around her. At primary school, she wrote an essay on how the Dutch school system could be organized in a more equitable and effective manner. While studying Business Administration at Groningen University she organised a national conference on transformational leadership, New Visions for Leadership, that became the start of an annual, national event, and helped put her University on the map. She found her studies very stimulating and innovative, and fully embraced the independent and self-driven environment around her.

After graduation, Gabrielle completed a 3-year intensive psychology curriculum while working in the private sector for companies such as Shell, IBM, Schiphol Airport and the National Post. Even though she had a nice salary, a company car and even a laptop – not at all a common benefit in those days – she did not feel fulfilled, but rather as if she was selling the wrong ideas and preaching about false values. In 1994 she was looking for a radical change in her life; it had to be international, and preferably the UN. She applied for an HR position in the International Atomic Energy Agency, IAEA in Vienna, and was invited for an interview. Getting the job and moving abroad for the first time was a huge jump in the unknown for her, but she immediately felt at home in the global, humanitarian environment. Battling with the bureaucracy was not always easy for a free spirit like Gabrielle, but she loved the international atmosphere and felt she was finally contributing to a better humanity through important work.

From the IAEA Gabrielle moved to the OSCE (Organisation for Security and Cooperation in Europe) and then to three other UN entities. During her career, she has covered various positions, most of which she started from scratch, intrapreneuring and fully using all her skills. A UN career does not offer job security as contracts are each time for one, maximum two years, but this has merely inspired Gabrielle to always give her best and excel in every role and situation, whether peace negotiation and nation building after hideous wars, or fighting for human rights. She has delivered HR, IT and General Services as the Field Administrative Officer on the management teams of the UNRWA Syria and Jordan Field Offices and provided conflict resolution services to more than 10,000 employees deployed in over 100 duty stations of the various UN Peacekeeping Missions in Darfur, South Sudan, Abyei, Burundi and Uganda. Three years ago, Gabrielle transitioned from the United Nations Ombudsman and Mediation Services (UNOMS) where she was the Regional Ombudsman and Mediator for the Sudan region, based in Khartoum and Entebbe, to become the Ombudsman and Mediator for the World Food Programme (WFP) in Rome. “Coming back to Europe was a natural step for me, even though I do miss Africa and the Middle East”, Gabrielle admits. “But I’m constantly on the move and luckily get to visit often.”

Many times, she developed her projects from zero, going out on a limb to improve the lives of those around her. “I have learned so much and developed important traits like perseverance, humility, tolerance and never losing hope”, Gabrielle lists. “Dealing with people from all sorts of cultural backgrounds has taught me the importance of interpersonal skills such as collaboration and respect, and the value of mediation. I also enjoy empowering people, especially women, and helping them find their own desire to improve and grow”, she says. “I have been able to bring the individuals at the centre of attention in so many occasions where laws, rules and regulations forget about them and their needs and rights. And I often even protect the organisation against itself and make it a better and more productive employer, for taking care of and supporting the development of the employees’ talent go hand in hand with excellence and innovation. This is the role of an Organizational Ombudsman and what I love doing.” Gabrielle believes it is essential for everyone to find the perfect professional path that speaks to them and suits their talents: not necessarily innate talents, but something that can be developed during the career path.

Gabrielle thinks women should always support each other where they can, as our paths tend to have more obstacles compared to men. She has searched for a women’s network in every location she has lived in, throughout her life. She was part of a Junior Women’s Network back in her days in The Netherlands, where she was also a founding member of a chapter of a women’s network. PWA came as a natural choice as she was exploring similar networks in Rome. She joined in 2016 and loves attending the conferences with topics ranging from professional to personal growth. She also thoroughly enjoys the PWA Christmas and Summer parties, up to the point that she plans her travel schedule around the dates, to be able to participate. Gabrielle is also an ardent supporter of WIN – Women’s International Networking, and has contributed as a plenary speaker or workshop leader on several occasions, recently in 2017 in Oslo. “Every year I hear new things at WIN that I bring back to my work, and create awareness of what is going around globally in equality, diversity and focus of businesses and entrepreneurs to make the world a better place by including women”, she recounts.

Gabrielle’s family consists of her British husband Richard, his children and grandchildren, and she loves spending time with all of them. Together with Richard she has also rescued and adopted three stray dogs – Clover, Buster and Shams (“Sun” in Arabic) – from Uganda and Jordan, and she truly cherishes her walks with the dogs as well as just sitting at home, scratching their backs on winter evenings. “My travel-rich job and dogs are not an easy equation, but luckily the dogsitter can stay with them while we are away. And it is always wonderful to come home to see their tails wagging behind the door”, Gabrielle smiles.

Gabrielle loves the element of air and at 17 was the youngest and smallest sky-diver in her home country. She cherishes adventure and is a proud backpacker, mountain climber, motorcyclist and skier – off-piste, naturally. Her passion to learn to fly was born in Uganda, near Lake Victoria, where she flew a small aircraft for the first time. She also did classical ballet in her youth – even auditioning for the Royal Dutch Academy for Ballet – and has danced through every genre from tap dance to modern dance and flamenco. Dancing remains one of the thrills in her life.

When I ask for her favorite place in the world, we settle – as only a mediator by nature would – for naming three, as “choosing only one would be like asking which of your children is your favorite”. After a few moments of thought Gabrielle lists Damascus with its souqs full of artisans bedazzling visitors with spices, wooden utensils, clothes, jewellery, copper, paintings and – stories. Another two close to her heart are the majestic sceneries of Wadi Rum – Valley of the moon – and Petra, in Jordan. And then Uganda, the Pearl of Africa with its varied landscapes and snow-topped mountains. And then… the list would go on forever as Gabrielle truly is a woman of the world. Can’t you just imagine her, flying a small aircraft over the beautiful landscapes of Eastern Africa and proceeding on to soar above the deserts of Middle East? Staying put is definitely not in her agenda.

read the other articles on the May 2019 Newsletter